She serves as the orchestra director for the Sinfonia Orchestra at Shenandoah Performing Arts Camp at Shenandoah University in Winchester, VA.  Veronica has judged several district orchestra festivals in North Carolina and throughout Virginia. In addition to her commitment to her students, Ms. Jackson was appointed director of the Rappahannock Youth Symphony Orchestra in Fredericksburg, Virginia in October 2008.

What is your Musical Philosophy?
I am a music educator. Definition - a person who educates people by connecting music to life and bringing life to music.”

Tell us about some of your favorite performances.
I performed in an orchestra with Bobby McFerrin conducting. We "performed" Rossini's William Tell Overture. We got to the Allegro (the "Lone Ranger" theme), Dr. McFerrin had the entire orchestra SING our parts for the rest of the Overture! Did I mention that we had an audience of about 10,000 people??? AWESOME!!! I also performed with The Trans-Siberian Orchestra in their Richmond Christmas show last December. AWESOME and I didn't get burned that badly!!!

Susanna Kemp
Born in Aberdeen Scotland, Susanna began studying the violin at the age of five. She is a founding member of the Covent Garden String Quartet with whom she performed across Britain and mainland Europe. Susanna also enjoyed a busy freelance career playing chamber and symphonic orchestral music across the UK, principally with the Chamber Orchestra of Wales, jazz and pop with The Listening Band, shows with  and various studio recordings.  She also played in the West End and on tour with many shows, notably South Pacific, which she can no longer listen to. As a child, she won the prestigious Schools Prom competition which culminated in a performance in the Royal Albert Hall. She went on to study at Chethams’ School of Music in Manchester and the Guildhall School of Music in London. Her teachers included Eta Cohen, Roger Raphael, Pauline Scott and members of the Emerson, Takacs and Lindsay String Quartets.

Currently, in addition to playing, she runs the Levine School of Music’s Summer Music and Arts Day Camp. She has lived in Takoma Park since 2002.

Do you have a musical philosophy?
My approach to playing stems from an early lesson from Peter Cropper, leader of the Lindsay String Quartet. “He told me to enjoy it.  As a teenager, that was a pretty novel concept and it stayed with me.  Since then, I have tried always to communicate my enjoyment with my audience, and I’m aware that the performances I enjoy the most are the ones where I feel a genuine connection with the players.”

Do you have a favorite performance?
On tour in Greece one summer, we were playing in an outdoor amphitheater built into the side of a hill. It was so hot our rehearsals started at 6 am and ended by 9 am.  Concerts began at 8 pm.  We were playing Britten's Serenade for Tenor, French Horn and Strings and I will never forget the chills that woke us all up as the notes from the horn bounced of the ancient stone in front of us and echoed over the valley.  Better than coffee in the morning!

And coolest gig?
Warm up act to a Beatles cover band in Marakesh, Morocco playing for a Bang and Olufsen conference. And they asked us to come and play Yesterday! Just like the real thing.

Bob Spates
You're already familiar with violinist Robert Spates since you hear his violin 'round the clock on radio and TV. He's on countless commercials for Food Lion, Wal-Mart and other national clients, and you often hear him in documentaries on National Geographic, Discovery, and the Learning and History Channels, and even that jazzy violin on the Weather Channel. His traditional fiddle and mandolin playing is featured prominently in the PBS series The Appalachians, as well as more formal violin in the score of several award-winning films. He appears before the camera in the Chris Rock film Head of State, and in the TV series Homicide.


Robert Spates is Principal violinist and soloist with Vox Amadeus in Philadelphia, an ensemble which specializes in Baroque and Classical repertoire performed on period instruments, and he is Concertmaster of the Capital City Symphony, the orchestra in residence at the beautifully renovated Atlas Performing Arts Center in Washington, DC. A Scottish fiddle champion, he also teaches Irish traditional music under the auspices of Comhaltas Ceol Erin. He is at home in ancient or modern classical music, jazz, folk music rock, R&B or country, so in addition to recording work and classical concerts, he has performed with many popular artists including Aretha Franklin, Ray Charles, Smokey Robinson, Barry White, Willy Nelson, Ray Price, Vince Gill, Manheim Steamroller and Christina Aguilera, to name only a few. While in the DC area he teaches at the Landon School in a newly created program that uses software to hone the skills of young musicians.

What is your musical philosophy?
Some time ago I performed at the memorial service for a brilliant young woman who was tragically killed in a terrorist bombing. Her body was never found. Her mother’s grief cannot be described in words. She could barely walk under the weight of her sadness. She was gently carried to the front row and seated. I had been asked to play a piece of classical music which I thought to be embarrassingly trite, but with the sound of the first few notes all traces of strain left that poor woman’s face and a glow came into her eyes as she looked up at me. I had to fight my own tears. The power of music cannot be judged or understood. It can only be shared.

Please describe a most memorable performance.
There are so many surreal experiences in a musician’s career! I performed for thousands of the faithful at a Papal Mass in the Vatican, after which guards showed me trash cans full of knives people had tried to carry inside. The President of the United States once brushed through a line of Hollywood celebrities just to shake my hand because he liked my fiddle playing. I was hired to play engagement, wedding, and divorce celebrations for the same couple (and their new spouses!) When I was first learning to play, my Grandfather's cows would follow me while I practiced, and I learned why it is dangerous to walk downhill with a herd of cows following you.

Caterina  Vannucci
Caterina is an Italian violinist with 12 years of extensive experience in symphony and chamber orchestras, opera and violin education. After receiving her BA in violin from the Istituto Pietro Mascagni in Livorno in 1999, she debuted in the Orchestra Giovanile Italiana directed by maestri Carlo Maria Giulini, Eliahu Inbal, Massimo De Bernart, Daniele Gatti, and played chamber orchestra under the lead of Andrea Nannoni, Antonello Farulli, Manuel Zigante, Renato Zanettovich and Angelo Bartoletti. Concertino and section violin at the Florence Symphonietta, in Firenze, directed by maestro Pietro Bellugi. She joined the orchestra of the important Festival Pucciniano in Torre del Lago, Viareggio (Lucca) specializing in opera repertoire.

Tell us about one of your coolest performances.
I happened to be part of a play in which the violin had to create sound effects. I had to improvise, and associate the appropriate sound to each character: every time the character entered or left the scene I would make the sound (or the noise) associated with it. It was curious and challenging to find, with the violin, the right effect that distinguished each one of them: creaky bones for the old man, a hopping sound for young girl!

What is your Musical Philosophy?
Music is for me the supreme form of expression, without place nor time. It is part of life, everyday, everywhere.

Please describe a most memorable performance.
We were playing in a church, in Florence, when in the middle of the concert the bells started to ring in mourning: they were announcing the death of Karol Wojtyla, everyone knew. The concert continued, amid strong emotions, for the loss of a great historical figure.


Sarah Wedgewood, a native of Winnipeg, Canada is classically trained – and equally adept at playing various styles of fiddle music. Sarah is a former member of the Fayetteville (NC) Symphony Orchestra, and has performed as a member of the Cedar Rapids Symphony Orchestra and the Waterloo-Cedar Falls Symphony Orchestra. She has also performed and taught internationally, most recently traveling to Brazil to perform with and coach chamber and orchestral student groups from the University of Braziliza. Additionally, she has worked as a teacher and chamber music coach at summer music programs, including the "Pre-College Summer Academy" at the Lamont School of Music in Denver, CO and "Strings the Thing" and "Fiddle Week" at the Penticton Academy of Music in British Columbia, Canada. She continues to perform locally on collaborative, seasonal concerts designed for listeners (and performers!) of all ages and musical backgrounds.

Sarah holds a Bachelor of Music degree in violin performance from Coe College, a Master of Music degree in Violin Performance and Suzuki Pedagogy from East Carolina University and a Master of Art degree in Arts Management from American University. Ms. Wedgewood has been teaching privately and in various school programs since 2004, including having been Director of Suzuki Outreach at Wahl-Coates Elementary School in Greenville, NC. She currently maintains a private Suzuki violin studio. Outside of teaching, Ms. Wedgewood works in the Summer Camp department at the Levine School of Music as a camp coordinator and the Teen Apprentice Program Manager.

Tell us about your musical philosophy
My musical philosophy is all about teaching and engaging the broadest audience possible.  I think music should be collaborative and I love finding new ways to make music approachable to different people and communities.

Can you share a favorite performance memory?
One of my favorite performances was with a regional orchestra youth orchestra.  We were invited to collaborate with the Winnipeg Symphony for one concert, and everyone in the string section got to be stand partners with one of the amazing symphony members.  It was my first time experiencing what it felt and sounded like to sit in a professional orchestra, and it was amazing!  I've been hooked ever since.

And strangest?
One of my funniest performance experiences was with the Waterloo Orchestra.  During the first piece, someone backstage fell and hit the stage light controls, turning off all the lights and resetting the pre-set features.  The stage lights sloooowly dimmed until it was pitch black.  It only took tech about 20 seconds to get lights coming back up on stage but nobody missed a beat, thanks to the conductor who yelled "keep playing!". 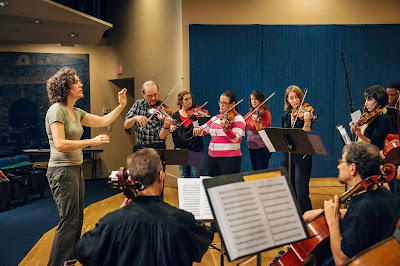