Lauded by critics for her “strong sense of style and drama” and her “enthusiastic and perceptive conducting”, conductor Victoria Gau brings a wide range of musical experience and expertise to her work. She is Associate Conductor and Director of Education for the National Philharmonic, as well as Artistic Director and Conductor of the Capital City Symphony, which she has led since 1997. 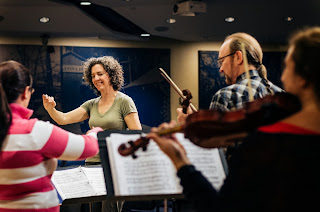 Maestra Gau first became known in the Washington DC area for her work as Artistic Director and Music Director/Conductor of the Other Opera Company in Bethesda, Maryland, which she co-founded in 1992.  She has also served as music director for such Washington area companies as The Washington Savoyards, Victorian Lyric Opera Company, Annapolis Opera Musicales, the Eldbrook Opera Ensemble, and the IN-Series.  She has guest conducted the Heights Civic Orchestra (Cleveland, OH), the Akron (OH) Symphony, the Friday Morning Music Club Orchestra, and has been a guest conductor for the Kennedy Center Messiah Sing-Along. She is the former Conductor and Music Director of the Richmond Philharmonic Orchestra in Richmond, VA.

Gau is in demand around the region as a conductor and string educator at youth orchestra festivals and workshops.  She is the former conductor of the Young Virtuosi Chamber Orchestra, an elite group of string players from the DC Youth Orchestra Program, and has conducted youth orchestras in Virginia, Ohio, and New York.

Ms. Gau has served on the opera faculty at George Mason University, and worked with vocalists privately and in the Crittenden Opera Studio. She has toured with Odyssey Opera Theatre and the Baltimore Opera Company, performing educational outreach in schools throughout the state of Maryland.  She was the violist for the Envoy String Quartet for 15 years. Ms. Gau holds degrees in Viola Performance and Conducting from the Oberlin Conservatory of Music, where she won the Phi Kappa Lambda Prize for Musicianship.

What is your musical philosophy?

Music is the expression of our shared humanity.  It is our job as musicians to communicate that, both on and off the concert stage. 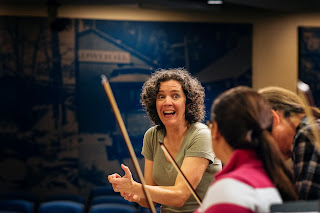 When I was a newly minted conservatory graduate, I took a gig playing viola for a performance of Handel’s Messiah.  But not just any Messiah – this was something called “The Young Messiah Tour”, and it was performed in a coliseum, with gospel and rock soloists and a drum set.  I did a lot of eye rolling and feeling superior in rehearsals, thinking this was all ridiculous.  Then, at the performance, when it came time for the Hallelujah Chorus, the ENTIRE coliseum full of literally thousands of people rose to their feet, took hands, and swayed with emotion.  That was the moment I realized that great music can be truly transcendent. Who was I to judge how people chose to experience it?