Jennifer Murray
Native of South Carolina, Jennifer has established herself as an exceptionally versatile and eclectic artist. Classically trained, she has a strong passion for teaching strings, performing chamber music, performing in orchestras and is an active composer and arranger for string ensembles. Murray’s chamber music experiences have been extremely prominent. She has been performing as a violist in the St. Charles string quartet since 2011. Other performance ensembles include New England Chamber Ensemble, Ensemble du Monde, Columbia players’ quartet and Prince Georges Philharmonic. She has also performed with various artists: Regina Carter, Mark O’Connor and Alison Krauss. Murray holds a Bachelor of Music from the Hartt School of Music (West Hartford, CT) in Viola Performance and a Master of Music degree from Boston University (Boston, MA).

What is your Musical Philosophy?
"Don't only practice your art, but force your way into its secrets; art deserves that, for it and knowledge can raise man to the Divine." L. vBeethoven 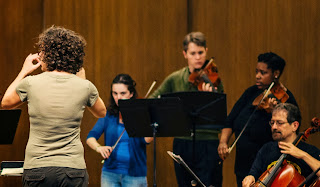 Talya Schenk
Talya is a winner of the UMBC (University of Maryland Baltimore County) Symphony’s Concerto Competition and was principal violist of the Symphony of the Potomac. Talya has attended world-renowned programs such as the Round Top Festival Institute and the National Orchestral Institute. She has participated in master classes with members of the Juilliard and Takacs Quartets.

Talya has had the opportunity to perform in Carnegie Hall’s Weill Recital Hall and at the Russian Embassy in Washington, DC. Talya earned a Bachelor of Arts degree from UMBC and a Master of Music from The Hartt School. She is currently earning a Doctor of Musical Arts from The Catholic University of America. Her teachers include Karin Brown, Rita Porfiris, Maria Lambros, and Kimberly Sparr.